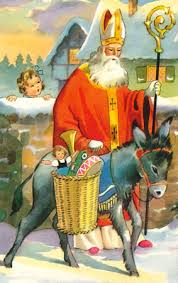 A very Merry Christmas to you from all of us here at Clifton Chambers.  We hope that you have a thoroughly relaxing break.

When, over the next few days, you are asked how Santa came to be and why it is that we buy eachother presents at this time of year, you can tell them this:

It all began with the birth of St. Nicholas in 280 AD in Patara, a city of Lycia, in Asia Minor. St Nicholas was a Christian priest, who later became a bishop. He was a wealthy person who would give gifts to the children of families in need. His gifts were given late at night, so that his identity would remain a secret. The children of the day were told to go to sleep quickly or he would not come.

It is said that, amongst many other gift-giving deeds, St Nicholas helped a poor man who had no money to give to his three daughters on their wedding day. St Nick dropped bags of gold into the stockings which the girls had left to dry by the fire. Ever since, children have hung up stockings on Christmas Eve hoping that they will be filled with presents by Christmas morning.

By 450, churches in Asia Minor and Greece were being named in honor of him. By 800, he was recognized as the a saint by the Eastern Catholic Church and he was eventually named the patron saint of children, sailors, Russia and Greece.

The name Santa Claus was derived from the Dutch Sinter Klass pronunciation of St. Nicholas. Early Dutch settlers in New York (once called New Amsterdam) brought their traditions of St Nicholas. As children from other countries tried to pronounce Sinter Klass, the name tended to be pronounced as Santa Klass, end evolved to become Santa Claus. The old bishop’s cloak with mitre, jewelled gloves and crozier were soon replaced with his red suit and clothing.

(For more, go to www.thehistoryofchristmas.com)